In programming languages the hello world program is the simplest thing we can write that provides some result, there is even a wikipedia page about it!. Traditionally this program outputs “Hello World”, but since we’re talking about shaders we’re just going to output some geometry instead.

Our pipeline is going to have a vertex and a fragment shader. The vertex shader will receive a vertex position, in local space, and transform it to clip space, see section on Spaces and Matrices. To perform this transformation it will use the projection-view-model matrix.

The processed vertices will then be interpolated using the built-in variable gl_Position, see the section on Vertex Shader.

The rasterization then produces fragments that will be processed in the fragment shader. This shader will only output a single color for each fragment that it processes.

The vertex shader starts with the version declaration

Then we declare the uniform variables. In this case we have a 4×4 matrix to store the projection-view-model matrix called pvm. We’re going to use a uniform block to store the matrix. This is probably overkill for a single matrix but in future tutorials this block will grow to accommodate more matrices.

Next we declare our input vertex attribute. In this case we only require the vertex coordinates, which is a vec4.

Finally we can write the main function. The only thing this function will do is to compute the built-in variable gl_Position, multiplying the pvm matrix by our vertex coordinates.

The full vertex shader is as follows:

The fragment shader is even simpler. It also starts with the version number, it declares an output variable, which will by default be the color we’ll see on the screen, and it writes a constant color to that variable.

And that’s it. The end result, a constant colored cube, is not very exciting, but this is the starting point for most of the shaders we’ll have in this tutorial. 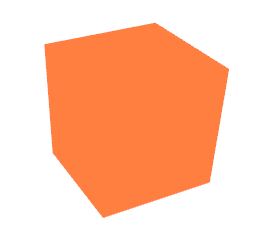 Full source code and a VS2010 project can be downloaded in here.

This website uses cookies to improve your experience while you navigate through the website. Out of these, the cookies that are categorized as necessary are stored on your browser as they are essential for the working of basic functionalities of the website. We also use third-party cookies that help us analyze and understand how you use this website. These cookies will be stored in your browser only with your consent. You also have the option to opt-out of these cookies. But opting out of some of these cookies may affect your browsing experience.
Necessary Always Enabled
Necessary cookies are absolutely essential for the website to function properly. This category only includes cookies that ensures basic functionalities and security features of the website. These cookies do not store any personal information.
Non-necessary
Any cookies that may not be particularly necessary for the website to function and is used specifically to collect user personal data via analytics, ads, other embedded contents are termed as non-necessary cookies. It is mandatory to procure user consent prior to running these cookies on your website.
SAVE & ACCEPT
%d bloggers like this: