In the previous example we saw how to transform the geometry sent from the application to draw a model with a color defined as a constant in the fragment shader. In here we’re going to explore some more flexible ways of setting color for a 3D model.

The first approach is to consider color as a vertex attribute. This implies that, in the application side, we must create another buffer to hold the color values per vertex, and add this buffer to the Vertex Array Object. On the vertex shader we’ll call this new vertex attribute as color, and declare it as an attribute, using the in keyword. We’re also going to declare an output variable called colorV, and we’re going to assign to it the value of the attribute color, so that is value is sent to the fragment shader.

The relevant lines are highlighted in the vertex shader:

A graphical primitive, such as a triangle, is defined with vertex attributes, namely position and, in this case, color. The color for each pixel inside the triangle will be the result of the interpolation based on the vertices’ colors and the value stored on gl_Position. For instance, in a triangle, if each vertex has a distinct color consisting of one of the RGB channels, the point in the middle of the triangle will be gray.

One of the matching mechanisms for variables across shaders is name based. The variable has the same name in both shaders. colorV, being declared as out in the vertex shader and in in the fragment shader.

A varying color per vertex is not a common approach because in most cases the color of a model, or parts of it, is constant, and passing a constant color as an attribute is a waste of bandwidth and memory since the color must be replicated for every vertex. Furthermore, when considering more complex shading algorithms, the “color” of an object is determined, not by a single vec4, but by a set of properties, hence each vertex would require a lot of unnecessary memory.

Usually each OpenGL draw call has a single color associated with it, and to implement this we resort to uniforms. Before each draw call we can set the respective color using a uniform variable, regardless of vertex count.

Under this approach, the color is constant for every vertex in the draw call, hence interpolation is not required. We can use the uniform variable directly in the fragment shader, skipping the interpolation stage for this values.

The vertex shader is as follows:

our fragment shader needs to declare a uniform variable to hold the color, color. This variable can be set from the application. Until then we can define any particular color, for instance red (1,0,0,1), as its default value.

The fragment shader is as follows:

From the OpenGL side we have a new task in this example: setting the uniform variable myColor. To achieve this we need first to query the location of the uniform variable and use that location to pass the required color value to the shaders. As shown in section Uniform Variables this can be done as follows:

With VSL it is a little bit simpler since the library automatically keeps track of the locations of every uniform variable. In the previous OpenGL code all that we need to change/add are the highlighted lines in the function responsible for setting up the shaders.

As we’re playing with color we’re going to explore another option which in this case is particularly interesting. Our model from the previous example is a cube where local coordinates vary between 0.0 and 1.0. This is a match to the way color varies. Both have three components and their ranges match. So what would our cube look like if instead of a user defined color we did output its position in local coordinates?

The vertex shader to try this requires that we use a variable to store the local vertex coordinates, and pass it on to the fragment shader. This is similar to the first version, the only difference being that the value being assigned to this new variable is not the color attribute but the input vertex coordinates, or position.

The fragment shader is similar to the first approach:

and the final result is: 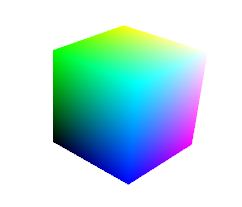 More than only playing with ways to paint a cube, this last approach can be one of the powerful debug strategies in our hands. As opposed to C, C++, or almost any other language, there is no console to print error messages or individual values. True, we can set a complex system with transform feedback and image load/store to get every piece of information we want from a shader, still nothing beats color output to eliminate some of the most common problems.

The source code and a Visual Studio 2010 project can be found in here. In the shaders source code we find preprocessor directives, similar to those in C or C++. This allow us to compact the two last scenarios in a single pair of shaders. Just uncomment/comment the define line in both shaders to try each approach.

This website uses cookies to improve your experience while you navigate through the website. Out of these, the cookies that are categorized as necessary are stored on your browser as they are essential for the working of basic functionalities of the website. We also use third-party cookies that help us analyze and understand how you use this website. These cookies will be stored in your browser only with your consent. You also have the option to opt-out of these cookies. But opting out of some of these cookies may affect your browsing experience.
Necessary Always Enabled
Necessary cookies are absolutely essential for the website to function properly. This category only includes cookies that ensures basic functionalities and security features of the website. These cookies do not store any personal information.
Non-necessary
Any cookies that may not be particularly necessary for the website to function and is used specifically to collect user personal data via analytics, ads, other embedded contents are termed as non-necessary cookies. It is mandatory to procure user consent prior to running these cookies on your website.
SAVE & ACCEPT
%d bloggers like this: