When we consider shiny materials we observe a bright spot depending on the camera and light’s direction, usually in a colour different from the diffuse colour. For instance an apple may be green, but the bright spot has the colour of the light. This bright spot, aka specular highlight, varies in size, being more sharp in metallic objects, and more blurred in plastics. The position and intensity of the specular highlight also varies with the position of the observer. 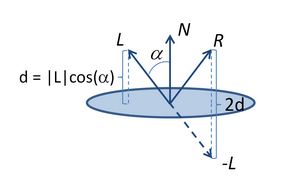 We know that both L and N are normalized, and cos(

) is simply the dot product between L and N. Going from the end of –L to the end of R one needs to go in the N’s direction, with a magnitude twice of cos(

). The equation to compute R, according to the diagram in the figure above is as follows:

Phong proposed that the intensity of the specular highlight could be computed as the cosine of the angle between the reflection vector and the eye vector, as depicted in the next figure.

Phong’s specular term captures this in the following equation:

Blinn later proposed an alternative to the Phong equation using the half-vector. The half-vector is the vector that its half way between the light vector and the eye vector. The vectors are depicted in the following figure.

Assuming that both vectors are normalized, the half-vector, H, is computed as

The cosine between the vector H and the normal vector, N, provides an alternative Phong’s original idea. Note that to use the dot product to compute the cosine the vector H must have been normalized previously. The equation with the half-vector is called the Blinn-Phong equation.

Applying these equations directly can cause the specular light to flood the scene, washing away all the other colours, as shown in the next figure:.

To prevent this flooding, and control the specular effect, Phong introduced another term, called shininess. The Blinn-Phong equation with the shininess term, s, is as follows:

The result of adding the shininess term can be observed in the following figure. For s = 1, we have the cosine curve. As s grows bigger, the curve gets steeper, essentially providing non zero values for the specular term in smaller and smaller intervals. On the other hand, if s goes below 1, then the curve gets wider, hence the specular term will affect more points.

Getting back to our teapot, when s = 100 we get the following result:

Figure: Teapot with specular term and shininess set to 100

Now, let’s see how to implement this. We need two more uniforms in our Materials block, the specular colour, and the shininess term.

The fragment shader is the same as in the previous section.

The end result of this shader applied to a torus is: 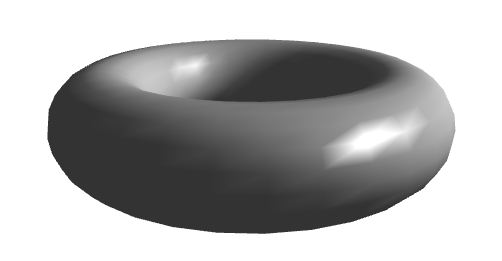 Hummm, it does look awful! The specular component tells a lot about the underlying mesh representing the torus. This is due to the interpolation that occurs based on the colour. To improve this result we either create a very dense mesh, or we use per pixel lighting, as described in the next section.

Note that the dense mesh only solves the problem when we have a triangle per pixel which is not practical, as a priori we have no knowledge as to how many pixels are covered by each triangle, and such a number of triangles might prove infeasible for real time rendering.